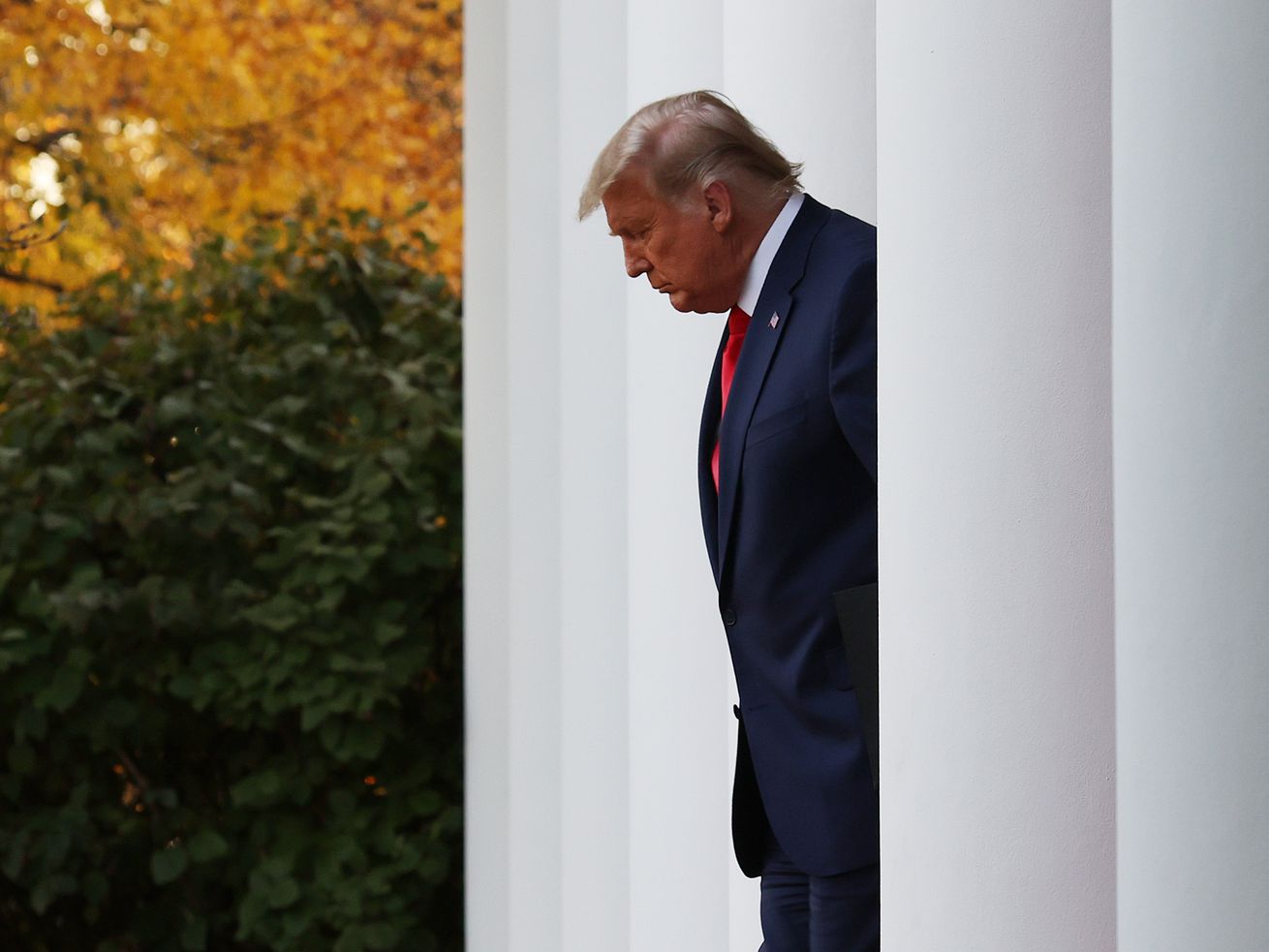 President Donald Trump walks up to speak about Operation Warp Speed in the Rose Garden at the White House on November 13, 2020, in Washington.  | Tasos Katopodis/Getty Images

Trump’s destabalizing rhetoric, which calls into question the integrity of the presidential election, could erode the strength of American institutions.

It’s been a week since President-elect Joe Biden’s supporters danced in the streets of cities across the US after every major news organization called the race in his favor. But their sense of relief at President Donald Trump’s loss has been replaced with uncertainty as Trump tries to sow public distrust in the result and overturn it, testing the limits of America’s democratic norms and institutions.

Trump has refused to concede, falsely claiming that there was widespread voter fraud and that the election has been “stolen” from him. He also filed a slew of lawsuits challenging election practices in Pennsylvania, Nevada, Arizona, Georgia, and Michigan — all states that the president needed in order to secure a second term, but that Biden ultimately won.

Republicans in the Senate — with the exception of Sens. Mitt Romney, Susan Collins, Lisa Murkowski, and Ben Sasse — have yet to acknowledge Biden’s win. Some, including Senate Majority Leader Mitch McConnell, have emphasized, with carefully chosen language, the president’s right to pursue legal challenges to supposed voting irregularities leading up to mid-December when the states’ electors formally choose the president. But others, including Sen. Lindsey Graham, have amplified Trump’s false claims of widespread voter fraud.

One senior Republican official told the Washington Post that the party is merely “humoring” Trump’s bruised ego without seriously contending that the result could change. Others have argued that it is merely a ploy to preserve their chances at reelection by currying favor with the president’s base and to keep Republican voters engaged ahead of two Senate runoffs in Georgia that could decide which party controls the chamber.

Trump appeared to acknowledge at least the possibility of defeat Friday during his first press conference since losing the election: “Who knows what administration it will be?” he said. “Time will tell.”

But Trump’s false rhetoric, and Republicans’ echoes of it, has real impact: Most Republican voters don’t believe that this was a free and fair election despite no evidence to the contrary.

It has a lot of Americans wondering: Is the US facing an attempt at a coup d’état, and could it be successful? Here’s what three political scientists who have studied coups in different parts of the world say. (Their comments are lightly edited for length and clarity.)

I don’t think “coup” is the right term, but neither is alarm over the situation unwarranted. A coup typically connotes a violent takeover of government, often by the military. Trump is instead trying to overturn the results of a free and fair election to remain in power. It is closer to what political scientists might call a “self-coup” or “auto-coup”: an attempt to shut down other institutional checks and balances to the executive.

This term was coined by Alberto Fujimori’s shuttering of the Peruvian congress in 1992, converting him into a dictator. Another way to put it is simply this: that Trump is trying to steal the election.

The concern with the present situation is that Trump is seeking to delegitimize elections as a tool for peacefully transferring power. And he is contributing to greater political polarization in an already-polarized environment. That is leading to an “us vs. them” mentality in which winning becomes more important than respecting the rules of the game, and, in the case of losing, waiting until there is another chance to possibly win.

This degrades popular support for democratic institutions as allocating power. In doing so, other alternatives — like supporting a strongman in power — become more attractive for voters who can’t imagine or tolerate the opposition winning. In the extreme, this can lead to power-grabs and coups, like it did in Argentina with the actions of Juan Perón or in Colombia as liberals and conservatives battled each other in the 1940s and 1950s. Personally, I don’t think we’re there yet. But Trump’s actions are bringing us closer.

Latin America is full of examples … where elected leaders sought to manufacture doubt about election results in order to extend their stay in power despite losing an election. In 2015, for instance, the Maduro regime in Venezuela lost parliamentary elections and sought to undermine the outcome as the result of foreign meddling and episodes of fraudulence. The government later convoked a constituent assembly to supplant the powers of the opposition-dominated parliament and then stacked the assembly with its supporters.

Evo Morales sought to extend presidential term limits through a constitutional referendum in 2016 and barely lost. He blamed the outcome on domestic and foreign conspiracy against him. He ultimately accepted the result and then found another way to sit for re-election. Morales then won re-election again in 2019 in an election tainted by accusations of fraud (this time on the government’s part). This ultimately led to his ousting in a coup by the military and political opposition.

Jonathan Powell, associate professor in the School of Politics, Security, and International Affairs at the University of Central Florida:

It’s completely inaccurate [to call this a coup]. From an academic perspective, if things occur under the letter of the law, we wouldn’t consider it to be a coup. Militaries and other individuals often try to give some sort of legal justification for what they’re doing. But it’s still going to be inherently illegal [if it’s a coup.]

Things could potentially move in that direction. I wouldn’t expect them to. I think that it can be a good thing to be concerned about the direction that things could take. But at this point, however desperate Trump’s maneuvers might look, there isn’t anything that’s really necessarily illegal about them.

Elsewhere in the world, contested elections can serve as a very serious trigger that does often prompt coups to be attempted. I wouldn’t expect that to happen here. But if you look at work from One Earth Future, they find in their models that elections can be incredibly destabilizing when it comes to coups, especially if it looks like an incumbent is losing.

Sometimes it might be the case where an incumbent might have lost an election and the military steps in and effectively vetoes what the vote was. And other times, you might see the opposition come in [to power] and then months, or maybe a year or two later, the military comes back in and overthrows the government. But again, the types of places that this is usually an issue are really not anything like the US.

The types of places that have coups are limited to countries that are incredibly poor, that have really stagnant economies, that are economically marginalized, that generally have very serious forms of other types of domestic instability, like civil war. Things like protests can be a red flag, and the US would qualify in that regard. And a really big thing going to be prior experience with things like coups, and the US just doesn’t have any experience with that and the institutions here are very well established. We can talk about norms being under threat with what Trump is doing. But in terms of the institutions themselves and the laws themselves, there isn’t really a sign yet that these things are under threat.

I think the biggest concern for me is how this distrust in the process could have implications for the future. Even though it might not be specifically tied to a potential coup right now, it is certainly very alarming for the US’s potential to remain a democracy in the future. That’s the kind of thing that could erode public faith in our institutions and potentially the institutions themselves. The courts are going to be the most important institutions. Because if a president is attempting to circumvent legal process, it’s going to end up in the hands of the courts.

Most people talking about a coup in popular discourse and the media typically use it in a fairly colloquial sense, meaning some sort of illegal or bad or undemocratic attempt to seize or maintain power.

What people in this context are really talking about is a self-coup or an “autogolpe,” where Trump is trying to undermine the election results so that he can stay in power and doing it in an unconstitutional, illegal sort of way.

Trump has not done any of those types of moves up to this point. There have been allegations of fraud and he has various legal challenges in different battleground states, as baseless as they may be and however much they sort of violate democratic norms. But [he hasn’t done] anything that shows he’s clearly trying to stay in power and will go to any length to do so.

So I’m relatively sanguine [about the fact] that we’re not seeing a coup right now. That is a slightly different question than, “Should we be worried about what could still come next?”

Anything is possible. Trump could, in theory, actually attempt an autogolpe between now and January. The rhetoric would escalate. We would see massive anti-Trump protests in a reprise of what happened with the George Floyd and Black Lives Matter protests this summer. Trump would, of course, try to restore law and order and put down as many of these anti-Trump protests as he could. But at the moment, I’m not sure that Trump really has the support to try to launch an autogolpe. At minimum, every successful coup needs at least the passive support of the military and security forces more broadly. It’s possible, but I don’t see it as particularly likely at this point.

What Trump is doing seems to be more grandstanding, setting up a post-presidency that looks favorable to him or potentially even [a run again in] 2024. The moves that I’m seeing so far don’t scream to me a person who is strategically acting to actually ensure that they stay on as president. If this were a coup, it’d be a very strange one, a slow-motion kind of coup that goes against pretty much what most scholars have observed about coups from time immemorial.

Source: 3 scholars say Trump isn’t staging a coup — but he still poses a threat to democracy